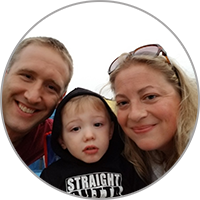 Meg – along with her husband Chris – opened Home Sweet Home Pet Care in October of 2007. It has been a wild adventure ever since! Meg has worked in several aspects of animal care including in vet offices, kenneling, grooming and in home pet care. Meg lives in Windsor with her husband,Chris and their adorable son, Jude. They also have a furry pack of mischief makers at home that keep her busy. Meg can’t wait to speak with you and welcome you to the Home Sweet Home family.

Bethany is a 2011 college graduate with a degree in Equine Business Management. During her breaks from college, she worked at a local kennel. She gained valuable experience in dealing with a variety of personalities, both dog and cat, during her time there. She also has experience working with a variety of farm animals, and worked at a local canine and equine rehabilitation farm throughout her high school years. She has a former street cat, Ninja, and adopted cat from Our Companions, Angel, to keep her busy at home along with her 3 adorable children. 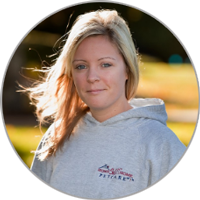 Jenn was recruited to the HSH team in 2010. She has been a stalwart in her progression through the ranks to becoming HSH’s most tenured and experienced employee. What began as a few dog walks on Tuesdays and Fridays led to her position as regional manager and now schedule and billing manager for the company. When Jenn is not at work she keeps herself busy by keeping son Colby and dog Izzy from sharing each other’s food. 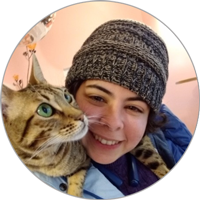 Aileen joined HSH in 2015 two years with the Connecticut Humane Society. Not only did Aileen bring with her compassion for all living things, but a swell of professional certifications and expertise. In less than one year, Aileen confirmed what the management team had hypothesized during her recruitment. She quickly mastered the demands of the job and with her experience in various fields, assert herself as a prime candidate to join the management team. 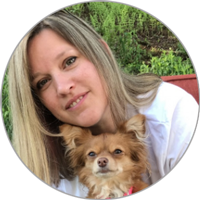 Amy started for HSH in March 2017. She has “a hubs,” three children, two rescue kitties and two rescue doggies. When she’s not working at her own company, she can be found on the sidelines of Little League games, or watching track meets, or arguing with her daughter that she can’t go to school covered in marker drawings nor with hair that can only be described as an ideal home for wayward birds.

She spends her free time volunteering for Dog Star Rescue doing everything from transporting to fostering, and currently spends a great deal of time handling their Facebook and social media needs as a member of their advertising/marketing team. When she comes up for air and there’s no cleaning to be done (ha ha ha), she enjoys reading, taking average photos in large numbers, quilting, do-it-yourself projects, making sure her Chihuahua feels like she’s the queen of the Universe, but most of all – sleeping!  I’m really good at it – she says.

Kim is a Windsor resident and during the school year she is a School Counselor at a local middle school. She also participates in endurance sports. She has multiple Ironman triathlon, marathon and ultra marathon finishes. Kim has a rescue hound mix named Dexter who howls at the theme of Law & Order! Her future plan is to rescue senior dogs. Kim is not only an employee, she is also a client!

Laurie has had a passion for animals her whole life. Growing up she rode horses and worked on many farms . She has a bachelors degree in equine science and most recently was the district manager for 18 Petsmart Stores. She understands how hard it is to leave your fur babies and treats them as her own. Her love for pets makes her a great asset to our team!

Barbara earned her degree in Animal Husbandry from Virginia Intermont in 1974. Since then, she’s succeeded in the role of human mom, rescue mom, foster mom, and honorary mom here at HSH. She’s ridden horses her entire life but due to an injury now works limited light duty pet sitting.

Meridith is a life-long animal lover having grown up with both cats and dogs. She’s volunteered for Northeast All Retriever Rescue as well as Adopt a Boxer Rescue. She currently is owned by two boxers, Jester and Ravenna also lovingly known as “The Wonder Twins”. Meridith is also a classically trained violinist who graduated from The Hartt School of Music. Nerd Fact: All of Meridith’s pets have had individual songs created just for them!

Charlene is currently pursuing a Bachelor’s degree in Zoology. She wants to care for animals the rest of her life and is especially passionate about helping endangered species. She is obsessed with her cat, Oreo, and treats him like a little baby – dressing him up in little sweaters and making cat houses out of cardboard for him. At school, she in on the Equestrian team and her favorite part of the week is going to the barn to ride. From horses to hamsters and everything in between, she loves them all.

Jess and her family recently moved to Granby in August of 2018. They are all thrilled to see all the wildlife that pass through their yard and occasionally make a buffet out of their trash. Jess is no stranger to the wildlife! With 3 boys, a husband and 2 pups Jess is quite the adventurer.

This is Kate with her lovely momma goat Veda! Kate has been a volunteer 4-H agriculture club member for almost 10 years and has loads of experience working with animals from cats to cows and she loves them all. Growing up Kate always enjoyed caring for friend & family pets whenever they needed and now she is excited to expand that with HSH!

Mara has worked for Home Sweet Home full time for just about 3 years, and she couldn’t be happier. She left her office job as a Graphic Designer to enjoy a more fulfilling day job where she gets fresh air, exercise, and makes friends with tons of wonderful animals. She has lived with animals her entire life and currently is the proud mommy of twin black cats, Eli & Stanley, who she adopted from a local shelter 4 years ago.

Sean attends Canton High School and has started his work career with HSH. His passion and love for animals is unmatched. He is on the varsity cross country, indoor track, and outdoor track team for Canton High. He enjoys being with people and animals as much as possible, because both make him very happy. Sean has shown, even at a young age, his dedication and compassion to serve the clients at HSH.

Amy was one of our original employees – dating all the way back to 2009! When Amy had her children she took time off but now that they’re both in school, she decided it was time to return to her all time favorite job at HSH Pet Care! Much to her glee, she’s back on the old route with a few other HSH original dogs.

Bobby retired in November 2017 after 27 years as a Correction Officer for the Connecticut Dept. of Corrections. Retirement has given him the great opportunity to work with and meet all kinds of great pets! Especially dogs. Bobby loves dogs and has never lived a day of his life without having at least one. Pictured with me are my two buddies, Shadow (the cockapoo) and Locky (the golden goof!)

In his spare time Bobby enjoys photography and taking lots of pictures of his college daughter’s soccer games, and his two sons when they don’t run away from his camera.

Savanna has lived in Canton her whole life, and had always been surrounded by pets. She currently has a dog and two rabbits, who she adores. In her free time, Savanna enjoys photography and volunteers with Dog Star Rescue taking pictures.

John grew up with dogs, likes to pet and walk dogs to unwind, and some might say he is a bit obsessed with dogs..and, he is not trying to offend any cats, who John has also owned and lived with in the past, and who have been good companions. Over the past 12 years, he and his family have continuously had anywhere from 2 to 4 dogs at a single time. Currently, he has two pitbull mixes, Josie and Clooney, and a beagle mix, Oliver, but is always willing to consider adding another pup! He likes to go on adventures with his dogs, wife, and 6 year old daughter, practice Brazilian Jiu-Jitsu, exercise, go hiking (preferably, with dogs), and visit breweries (preferably ones that have dogs around that he can pet…and that have great beer, of course).

Jule is not shy around any animal. Growing up around horses, ponies, chickens, pigs, and of course cats and dogs has given her the ability and no fear attitude to care for any living creature. It’s truly her passion to care for animals and she loves it!

Looking for a complete career change, and being a big time animal lover, Katherine left a job in banking and joined HSH! She has been surrounded by animals her whole life, mainly big slobbery pooches, and loves that she can spend her days snuggling and smooching puppies and kitties of all size.

In her free time Katherine loves hiking, kayaking, and exploring outside with her boyfriend and their two Dalmatian pups, Otis and Archer. She is also obsessed with tv shows – mainly The Office, Parks and Rec, and Game of Thrones – and can most often be found on the couch binge watching Netflix and eating snacks!

Come have fun with us!